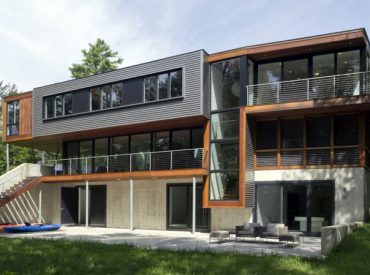 Nestled in the Berkshire Hills of Becket, Massachusetts, the Yokum Pond House is a peaceful getaway and a stunning piece of architecture designed by David Jay Weiner.

The home, spanning about 5,000 square feet, takes full advantage of natural lighting, and gives its inhabitants the chance to relish and explore their natural surroundings. The shape and structure of the home makes peace with the nearby landscape, rather than challenging it and disrupting the natural lines.

Going along with the theme of being in harmony with nature, the home uses eco-friendly, recyclable materials. It also features solar collectors that supplement the electrical grid system, and there’s also a geothermal heating system in place.

Spanning three levels, the Yokum Pond House caters to every family’s need. The first floor is used primarily for entertaining, with an adjacent terrace that serves as an outdoor play area for children. Inside, there’s a media room, a room for billiards, wine cellar, kitchenette and sauna.

The second, or middle, floor features a kitchen and living/dining area. There’s a screened porch that extends off the dining area overlooking the woods and nearby pond.

The bathrooms and bedrooms are situated on the third, or top, floor. The master suite has a private deck and bathroom. There are also four children’s bedrooms. Bedrooms are paired in twos with two adjacent bathrooms for easy access.

Windows envelope virtually every corner of the home, marrying the indoors with the outdoors. The kitchen features an expansive ceiling with skylights and tall windows to make the most use out of natural lighting.

While the kitchen’s design is clean, modern and simple, it’s extremely functional and provides plenty of counter and storage space.

The living and dining areas are separated by a partial wall, which features a fireplace on the living room side and artwork on the dining room side.

A series of vertical windows provides an uninterrupted view of the outdoors as you climb the stairs to each floor.

The site of the home has been left as undisturbed as possible and has been restored to its natural growth to preserve the surrounding wildflowers and wetlands. The inhabitants enjoy an unspoiled view of nature no matter which room of the home they’re in.

David Jay Weiner’s firm has won several awards and offers a complete range of architectural services. The firm has completed projects – both residential and commercial – in several states, including Colorado, New York and Texas. The firm has also worked on a project in Vietnam: The Sun Village Tower.

But before David opened his own firm, he worked on large-scale institutional and commercial projects at a firm in Tokyo, Japan. His design credits include the Scientific Conference Center in Osaka, Japan; and Disney’s Employee Center in Los Angeles.

David has given lectures on modern architecture at NYU’s Art Department.

Mr. Weiner is a licensed architect, who is registered in New York and New Jersey. He is also a member of the American Institute of Architects.