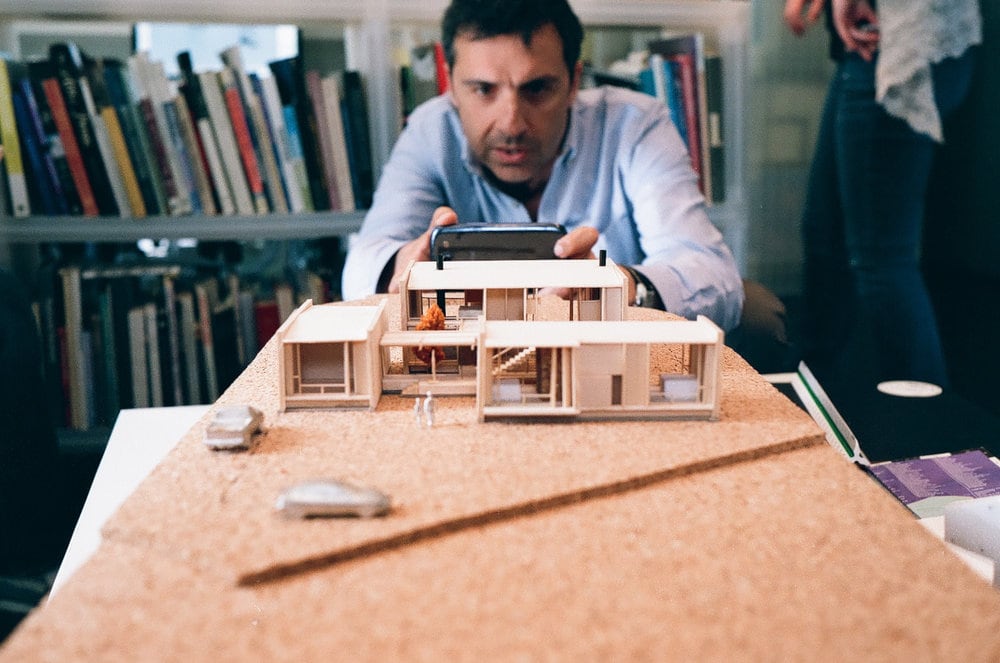 MB Architecture is one of the leading modern house architects in New York. The company was opened 30 years ago and has offices in Chelsea and East Hampton. The company helps design, innovate and build a range of structures and spaces with affordable, prefabricated micro-homes.

MB Architecture’s projects can be found all over the world including:

Maziar Behrooz, a leading architect and graduate from the Tulane and Cornell Schools of Architecture, is the “MB” in the company’s name.

He is recognized around the world and is on the Tulane School of Architecture’s Advisory Board.

Key projects that have been built by MB Architecture are:

The home embodies the natural landscape surrounding the home with large oak trees and massive windows that allow the homeowners to stare out into nature.

The home wraps round a mature oak tree and features a sprawling outdoor area with a lavish swimming pool.

Behrooz claims that the home is a project that took 10 years of prototyping experience to bring to fruition.

The home works off of the design of the Insta-house and is modeled after it. A series of 40-foot containers are stacked together in a single day allowing for rapid home building. A glass walkway was added as well as a 10-foot container which can be seen hanging off of the second floor of the home.

An indoor/outdoor environment is created using large windows and doors.

The exterior of the home was painted black to meld into the landscape and there are multiple floor-to-ceiling windows to allow for ample natural light to beam into the space.

The living room space features massive ceilings and windows while a master bedroom can be found on the second floor of the home and utilizes a 20-foot container that was cut in half specifically for the room.

Custom furniture decorates the inside of the home while large upstairs windows make the home’s occupants feel like they’re in a massive treehouse surrounded by the quiet and tranquility of nature.

Insta-house is a concept that MB Architecture first explored when trying to design spaces that were:

The project’s first prototype was released in 2009 after a year of design and planning. Insta-house utilizes four, 40-foot shipping containers that are recycled. The design typically features a two-bedroom, two-bathroom concept which can be installed in a matter of a day.

Fabrication takes eight weeks, and the concept was also used in the Amagansett home with modifications and the addition of another bathroom and two bedrooms.

The flexible design concept and strength of container homes allow for windowed walls and plenty of floor-to-ceiling window options. A grand staircase brings the occupants to the second floor of the home with an overlooking balcony.

The Second Floor has a:

A black exterior is often used to make the Insta-house meld in with the surrounding areas. Windows can be placed on the side walls of the home, or these windows can be replaced with large bay doors, fully windowed, that can be opened up to let in fresh air.

MB Architecture designs not only the building’s structure and exterior but also the interior of the space. The firm will provide all of the lighting, paint colors, floor finishes, cabinetry and plumbing. Once the structure is set and installed, all that remains is for the homeowner to bring all of their belongings to make the home their own.

Many of MB Architecture’s buildings have been modeled after the Insta-house prototype.

It’s one of the lasting prototypes that can be reconfigured or adapted to meet the needs of the home’s occupants.

Container Studio is yet another masterpiece by Maziar Behrooz’s MB Architecture firm. The art studio sits on the East End in Long Island and is made from recycled shipping containers. The studio has a double height ceiling and spans a modest 840 sq. Ft.

Built to the client’s specifications, the client needed a new space and was on a tight budget to create a site that was:

Container Studio included two shipping containers, priced at $2,500 each including delivery. The containers had the following dimensions:

A 9’ foundation weas used as a cellar and the company cut 75% of the flooring to offer a wide staircase and leverage the high ceilings provided by the shipping containers.

The staircase became an integral part of the design allowing for guests to enter the studio and view artworks as they transcend the stairs.

Once at the top floor, guests enter an area that has a sitting space and intimate work area overlooking the lush, natural landscape out of the windows.

Large floor-to-ceiling windows were put in place for the project to offer an abundance of natural light that shines into the studio space. The owners of the studio also had MB Architecture work on their main residence, on the same property, before they had the Container Studio constructed.

MB Architecture is known for building and designing impressive homes and spaces that utilize the budget-friendly option of a container home and the natural surrounding landscape. Dark exteriors are often the go-to choice to provide a natural transition from the home to nature with massive windows and a bright, airy interior.